In Trust We Trust? How Social Norms Shape School Reforms 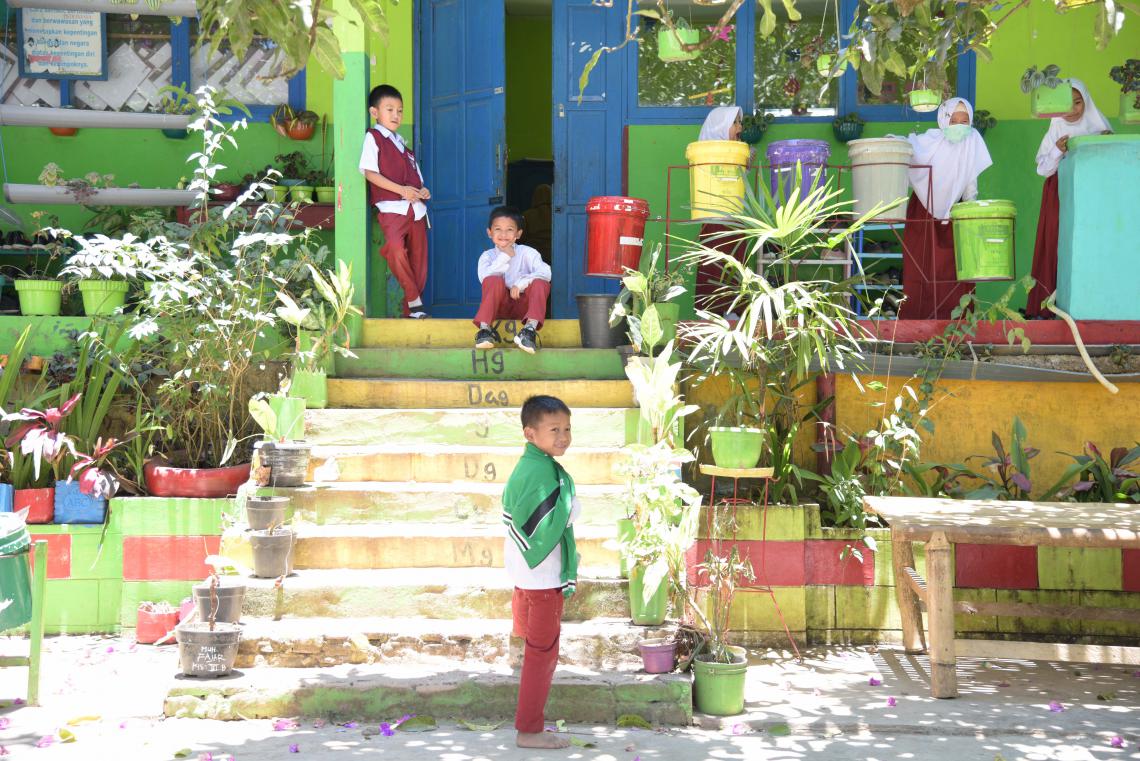 It’s not unusual to talk about how context can influence education systems. More than two decades have passed since Pawson and Tilley popularised the phrase ‘what works, for whom, in what circumstances’. Yet there’s at least one set of circumstances which can strongly influence educational innovation, but which isn’t discussed nearly often enough: social norms.

By social norms, I mean patterns in what people generally prioritise and in how they typically interact in shared social settings. Even in a delimited social setting, these patterns are norms rather than universals (because humans aren’t robots), but these dominant patterns can strongly shape people’s interactions with their environments—including education systems.

A new paper by the RISE Indonesia Country Research Team tackles social norms head-on. In this paper, Risa Nihayah, Shintia Revina, and Syaikhu Usman analyse extensive fieldwork in three Indonesian districts that have successfully introduced innovations for educational improvement. The three studied districts—Bukittinggi, Yogyakarta, and Gowa—share an innovative streak, but differ in both their social norms and the innovations they initiated.

As shown in the table, the sorts of innovations that were initiated reflect the opportunities and constraints of local social norms. Both Bukittinggi and Yogyakarta enjoy high levels of trust, but their social norms results differ in tenor, resulting in different educational innovations. For example, the weekly school visits in which Bukittinggi principals observe (and probably compare) lessons in each other’s schools are coherent with local prioritisation of both collective progress and individual competitiveness. In Yogyakarta, parents team up to support classroom learning out of a traditional sense of obligation to take care not only of their own children, but also their children’s classmates.

Moreover, in high-trust Bukittinggi and Yogyakarta, educational innovations take the form of flexible structures that rely on cross-stakeholder collaboration to improve student learning. In contrast, the innovations in low-trust Gowa are top-down mechanisms for raising teacher attendance and student grade attainment—which may not necessarily translate to learning. As the authors recount, some teachers and principals in Gowa disagreed on the Student Automatic Promotion scheme because students who hadn’t mastered current curricular expectations were likely to fall further behind after progressing to the next grade. Despite their disagreement, they complied with the scheme out of a prevailing belief that those who critiqued the government would be redeployed to schools in remote mountainous areas.

This relates to a set of observations that some of us at RISE have been puzzling over:

The influence of trust-related social norms on organisational reform has also been observed elsewhere. In forthcoming RISE ethnographic work on the Delhi school system, Yamini Aiyar and co-authors found that the Delhi government struggled to embed a set of policy reforms aiming to shift the focus away from syllabus completion toward vital, foundational student learning. The would-be reformers faced an uphill battle amid deep-rooted norms in which teachers were treated—and were used to being treated—as functionaries at the bottom of the bureaucratic pecking order, who were expected to fulfil administrative directives, to maintain detailed administrative records, to finish the syllabus, and to maximise exam pass rates. Despite the government’s new stated priority of giving all students a strong foundation in literacy and numeracy, teachers simply could not trust that administrators would not penalise them for sidestepping the curriculum.

This challenge isn’t unique to education systems. In a 2011 article, industrial organisation scholars Robert Gibbons and Rachel Henderson conceptualised the sort of challenges faced by the Delhi government as the twin problems of credibility and of clarity in relational contracts. Relational contracts are necessary in situations where it is impossible to allocate rewards and penalties solely on the basis of the pre-agreed, court-enforceable objective measures that underpin formal contracts. Instead, relational contracts depend on both parties’ belief that it is better for them, in the long term, to continue collaborating with the other party; even though each party is also aware that the other could betray that trust.

Within such informal, open-ended contracts, the problem of credibility is the difficulty of getting the other party to believe that you will keep your promises—like how the teachers in Delhi would not believe that the government truly wanted them to focus on foundational learning rather than syllabus completion and pass rates. The problem of clarity is the difficulty of getting the other party to understand your promises—which, in the Delhi context, was complicated by the fact that all government directives were filtered through the bureaucratic jargon of administrative circulars, which were not only hard to interpret, but also inextricably linked with ‘thin’ administrative accountability. Aiyar and her co-authors call this ‘talking like a state’ (after James Scott’s Seeing Like a State). As Gibbons and Henderson argue, overcoming these problems of credibility and clarity is hard, requiring a lot of ‘thick’ knowledge and convincing communication.

In short, it’s difficult to create trust in low-trust contexts. More worryingly, the ‘thin’ accountability mechanisms that do work in low-trust settings are likely to reinforce these low levels of trust, in a vicious circle. Legal scholar Lynn Stout examines this vicious circle in her 2010 book on the value of cultivating people’s consciences rather than overemphasising economically rational self-interest, in which she argues that:

"… asking people to focus on extrinsic incentives can have the unfortunate effect of 'crowding out' internal incentives like trustworthiness, honor, and concern for other’s welfare (p. 251)."

Or, as political scientist Jane Mansbridge wrote in a 2014 chapter on accountability:

"… sanction-based accountability not only stems from distrust; it creates distrust (p. 55)."

Or, as RISE research director Lant Pritchett puts it:

After completing a longitudinal study of 400 schools in Chicago, Anthony Bryk and Barbara Schneider wrote a book titled Trust in Schools: A Core Resource for Improvement. In the book, they argue that school improvement is facilitated by ‘relational trust’, which is distinct from the unquestioning belief of organic trust and from the instrumental logic of contractual trust. Instead, relational trust entails shared expectations about relationships between teachers, students, families, school principals, and education authorities; alongside ongoing validation of those expectations as people observe each other’s actions and try to discern the intentions underlying those actions, so that they can withdraw trust if it is unjustifiably violated. (Note that Bryk and Schneider’s relational trust based on shared understandings and ongoing validation loosely parallels Gibbons and Henderson’s relational contracts requiring clarity and credibility.)

Similar arguments about the advantages of norms of autonomous, but continually validated trust—over norms of formulaic rewards and sanctions—have been made by Dan Honig in international development, Onora O’Neill in philosophy, and Akshay Mangla in comparative politics.

While there is consensus about the benefits of trust, there is much less clarity about how to build such trust in initially low-trust settings. To return to the study of district-level innovations in Indonesia, the Gowa initiative in which school security guards help to reduce teacher absenteeism is a crucial first step for improving the education system. Yet we don’t have obvious answers about what would help Gowa to step beyond this foundational but ‘thin’ form of accountability toward open-ended, learning-oriented collaborations. Gowa’s current configuration of low trust and other social norms is enmeshed in unalterable geography, longstanding history, and recent rumours about what happens to teachers who speak up, among other factors.

Some studies offer hints. Aiyar et al’s work on Delhi schools suggests that intensive, short-term ‘mission mode’ interventions that maintain a laser focus on student learning can help to shift long-established perceptions. Bryk and Schneider’s work on Chicago schools indicates that competent school principals may be able to jump-start the development of trust, especially when they have the authority to fill vacant positions with handpicked, motivated teachers. Yet there don’t seem to be easy answers.

Still, perhaps it’s fitting—even if inconvenient—that there aren’t universal answers about building trust among education stakeholders. If trust and education are both ‘thick’, socially embedded phenomena, perhaps the answer will vary from context to context. And perhaps the way to find those answers is by asking the people who actually live, work, and learn in a given context; trusting in their knowledge and experience, but verifying their views by comparison with other stakeholders in the setting and with the accumulated wisdom of practitioners and researchers elsewhere.

This article was written by Yue-Yi Hwa. She is a Research Fellow for the RISE Programme at the Blavatnik School of Government, focusing on teachers and management. She received her PhD in education from the University of Cambridge. Her PhD thesis looked at the relationship between teacher accountability policy and socio-cultural context across countries, using secondary survey data on education and culture alongside interviews with teachers in Finland and Singapore. Previously, Yue-Yi taught secondary school English for two years through Teach For Malaysia, and was a Research Fellow for the Penang Institute in Kuala Lumpur. She has also conducted research for the World Bank’s MENA education team. She holds a master’s degree in comparative government from the University of Oxford.