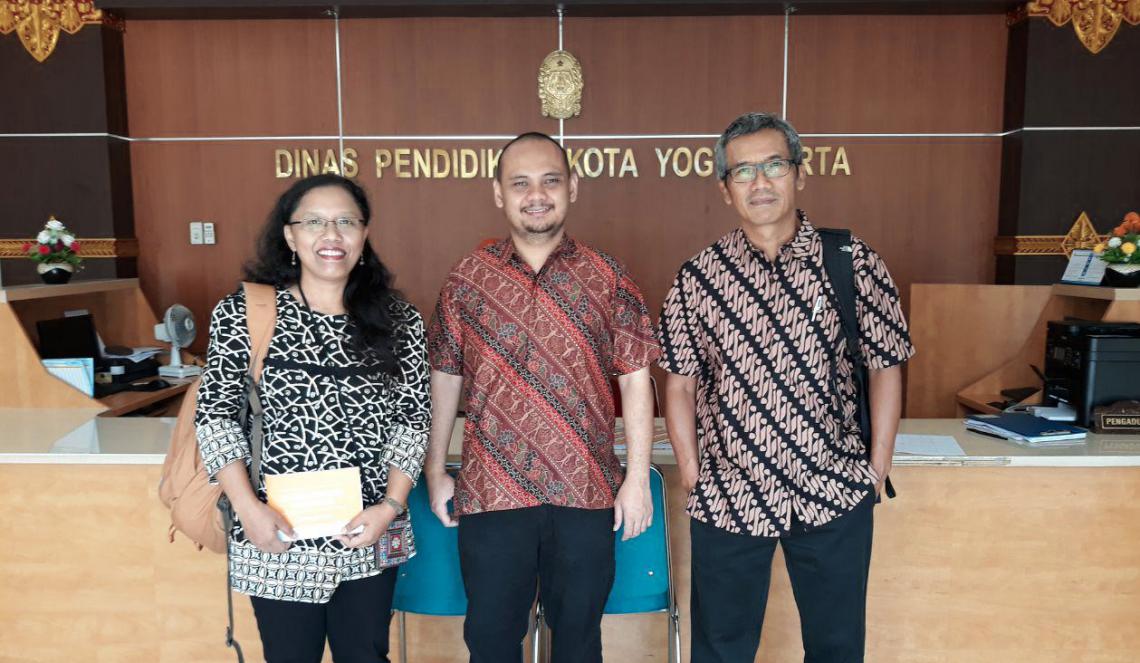 The City of Yogyakarta was the second area to be candidate for learning laboratory in the Education Policy Innovations at the District level studies (Reform Area B). As the capital city and centre of government of the Special Region of Yogyakarta (DIY), this city is known as one of the districts with good education performance. Net enrolment rate in Yogyakarta is high, which is above 80% (2017 Regional Education Budget). In addition, other aspects of education in Yogyakarta also appear positive, such as the qualifications of teachers with an average education of at least D4/S1; and the score of the Teacher Competence Test (UKG), National Examination (UN), and National Examination Integrity Index (IIUN) at the junior secondary level which are above the national average (2016 & 2017 Regional Education Budget).

Yogyakarta also initiated a number of innovations to improve the quality of education in its area, such as online Student Learning Consultation (KBS) program, Non-Permanent Teacher (GTT) workshops, junior secondary school teacher partnership, and scientific writing training. In addition to showing a positive impacts, the said innovations are also generally sustainable. Information about education innovations in Yogyakarta was obtained by the RISE team through telephone surveys and media-tracking.

The RISE team held hearings in Yogyakarta twice; first on 2-4 May and second on 31 May 2018. At the first hearing, the RISE team was welcomed by the ranks of Yogyakarta City government, such as the mayor's representative, the education agency official, the Regional Development Planning Agency (Bappeda) official; and member of Commission B of DIY’s Regional Representative Council (DPRD). When visiting the Yogyakarta City Education Agency, the RISE team was welcomed by Drs. Rochmat, M.Pd. Head of Primary School Development (left) and Drs. Sugeng Mulyo Subono Head of Non-Formal Education and Early Childhood Education Programme/PAUD (right). Discussed at the meeting, among others, a number of education innovations that had been implemented in Yogyakarta. | Photo: Luhur Bima Utari and Sudarno were invited to see the room for carrying out the KBS Online at the office of Yogyakarta City Education Agency. | Photo: Luhur Bima The second hearing with the agenda of following up the drafting of memorandum of understanding (MoU) between the Yogyakarta City Government and RISE. | Photo: Aaron Situmorang

Signing of Memorandum of Understanding (MoU)

After the hearings and intensive communication between the Yogyakarta City Government and the RISE Team, both parties agreed to start the long-term collaboration, which was described in a memorandum of understanding (MoU). The signing of the MoU was held on 7 June 2018 by Mayor of Yogyakarta Drs. H. Haryadi Suyuti and Dr. Asep Suryahadi Director of the SMERU Research Institute. The signing of memorandum of understanding (MoU) on collaboration between RISE and the Yogyakarta City Government in Jakarta by Dr. Asep Suryahadi (Director of SMERU/Chair of the Steering Committee of RISE Programme in Indonesia) witnessed by the representatives of RISE team (Utari and Syaikhu). | Photo: Tony Liong

In the collaboration that will last until 2022, the RISE team will conduct research related to education policy innovations in Yogyakarta. At the end of August 2018, the RISE research team went back to Yogyakarta to conduct diagnostic studies related to learning.