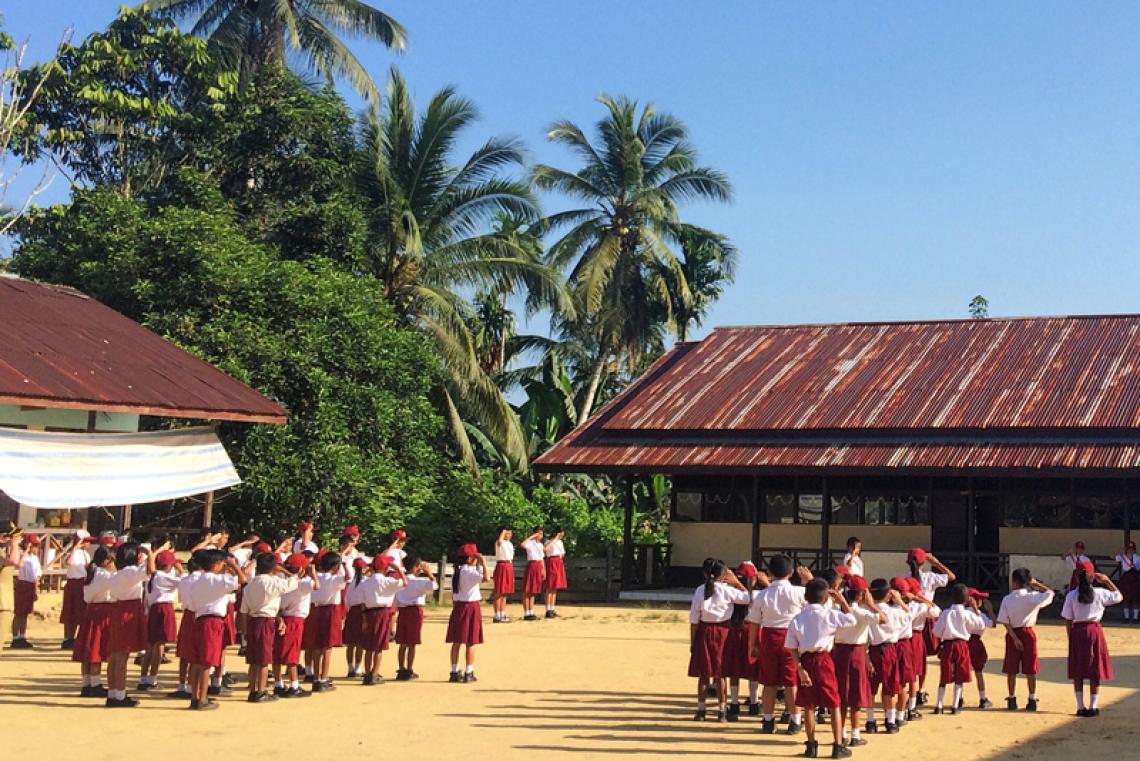 One afternoon, at the end of 2014, under the palm trees in the courtyard of a hostfam’s* house in Mukekuku Village, East Rote Sub-District, some young teachers (designation for voluntary teachers) of Indonesia Mengajar and I sat in a circle. In one corner of the yard, jerry cans were lying around. In another part of the yard, a wood-burning was still warm after being used to process nira (fresh sugary sap from lontar palms in the morning.

Farli, a young teacher with Indonesia Mengajar assigned in the village, was telling about the bustle happening then and there. He also shared the hopes and challenges of education in Mukekuku. The other young teachers were listening carefully, occasionally chiming in with stories in their villages. That year, there were eight young teachers assigned in Rote Ndao District, East Nusa Tenggara Province (NTT). They taught at eight different schools all over Rote. I was there to attend the program’s reflection session, which was carried out in the middle of the teachers’ one-year assignment. That day we were scheduled to visit the village where Farli was assigned and the school where he taught, the Inpres Oeulu Elementary School in East Rote.

The people in Mukekuku were uncommonly hectic. Every day in early mornings, the villagers were busy tapping nira from lontar palms. After the extraction was done, they would immediately process the nira into sugar or sopi (a traditional drink from NTT). Every day, the bustling ended at around nine in the morning.

Therein lies the problem—at least from our perspective, the perspective of people who live in Jakarta. Children in the Mukekuku were often late for or skipped school because they had to help their parents tap and process nira. Student attendance during the nira-tapping season was then low, although teachers had tried to convince parents to send their children to school. It was not that the parents did not want their children to go to school; they simply could not afford to skip the tapping season, which usually lasts for three months. The reason for this was their income from tapping nira during those months could help sustain their family’s lives throughout the year.

Rethinking the Concept of Student Attendance

Conditions such as in Mukekuku are common in many of Indonesia Mengajar’s assignment areas. In villages in Fakfak District, West Papua Province, children occasionally skip school because at certain times they have to go to the fields with their families to harvest nutmeg. In some islands, there are periods called the fish harvest season, where families go to sea to catch fish, thus “lowering student attendance at school”.

For people living in Jakarta or other regions with a similar way of life, the quality of education is pursued by ensuring student attendance in schools fits the academic calendar convenient for some Indonesians: being present from morning to afternoon throughout the school year, except for religious and school holidays. Attendance during the school year may only be appropriate for urban children or in the past—when the concept of modern education was initiated at the beginning of the New Order Regime—for rice farmers in Java. Rice farmers generally work throughout the year, especially in areas with good irrigation. Sometimes they plant other crops during the dry season. They leave early in the morning and go home late in the afternoon without having to encounter the west wind season or the harvest season like in Rote or Fakfak.

Such complexity raises concerns not only in educational practices but also in its philosophy. When modern education believes that each child is unique with their intelligence, and therefore it is the teacher who has to adapt their teaching approach to the uniqueness of each child, then shouldn’t we also need to adjust the approach to child learning, including how they attend school, to their way of life and their environment? Surely we can find learning concepts convenient to nira- or pepper-harvesting seasons, just as we found multiple intelligence approaches for diverse children’s intelligence.

The one-size-fits-all approach in education has drawn many criticisms. Within a broader framework, at least in the past decade, and throughout the nine years of Indonesia Mengajar’s implementation, there has been a variety of policies which confirm the single policy concept, including the National Exam (UN), 2013 Curriculum (K-13), and school zoning system. Findings from the field hold the same conclusion: the one-size-fits-all policy hardly works and instead provokes adaptations deviating from its objectives.

The one-size-fits-all policies are generally nationally-implemented, relying on the enforcement of the regulation (instead of consensual engagement from the actors), and has a tight implementation schedule. The most intricate property of such policies is that they are oftentimes mechanical by overloading the key beneficiaries: the students. Take the UN policy for example, which eventually put pressure on students to achieve certain learning outcome, instead of urging other education actors such as teachers, local education offices or the ministry of education to work harder in improving student learning outcomes. “Consequences” seems to fall on students and not on other education actors who actually hold the resources and capacities. When the UN scores drop, students are the ones who have to bear the consequences; there is no “penalty” for officials in the education offices, nor the ministry.

Likewise with the school zoning system, which conceptually aims to achieve educational equality, yet, puts the heaviest pressure first on students rather than other education actors. It is the students who have to adjust to the state to realize their education equality policy goals. Whereas, the state should be the ones who carry the heaviest load of distributing qualified teachers to all schools.

Good teachers adapt with the needs of their students. Ideally, a state should also familiarize itself to the needs of its students. With students’ diverse socioeconomic conditions, a one-size-fits-all policy, in practice, has never been able to answer the challenges of education. With all its resources and capacities, a state should be able to accommodate the diversity of its students, including formulating multiple policy for every type of children, family, and their environment.

This article was written by Hikmat Hardono (chairperson of Indonesia Mengajar, member of RISE Programme in Indonesia Advisory Board).

*Hostfam is an acronym for host family, who accommodates Indonesia Mengajar’s voluntary teachers in their assignment villages.