A Sliver of Hope from the School at the Hillside 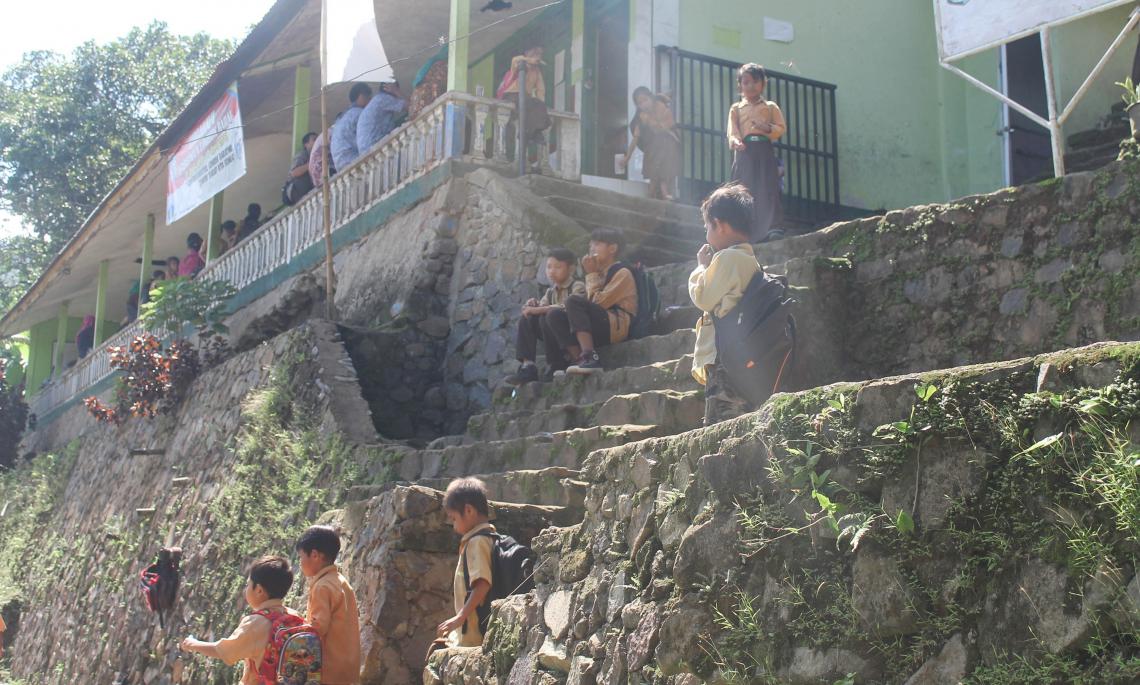 Access to education is still a challenge in many remote areas in Indonesia. In schools with difficult access, teachers hold a vital role to ensure that students come to school and study until they complete basic education. This story from a school at the hillside is an example.

It was a sunny morning in one of the villages in West Lombok District, West Nusa Tenggara Province. A burst of sunlight was coming through the lush leaves and painting orange splatters on the footpath on the hillside. Almost every day on that path, footsteps are heard. Some wear sandals, and others wear shoes. All headed to the same place; an elementary school located at the hillside.

Students studying at that school were not just those who live near the school. Some of them came from neighbouring villages, and not a few lived on the other hill. Every day, they’d have to travel for miles to school.

“Students who live on the other hill would have to walk two hills to get here,” said Mahudin, the head teacher of the elementary school. Students whose homes are farther away usually leave before sunrise carrying torches to light their travel.

Like some of his students, Mahudin had to walk along steep and climbing paths. From his house, which was about two kilometres from the school, he took about an hour to get to school. 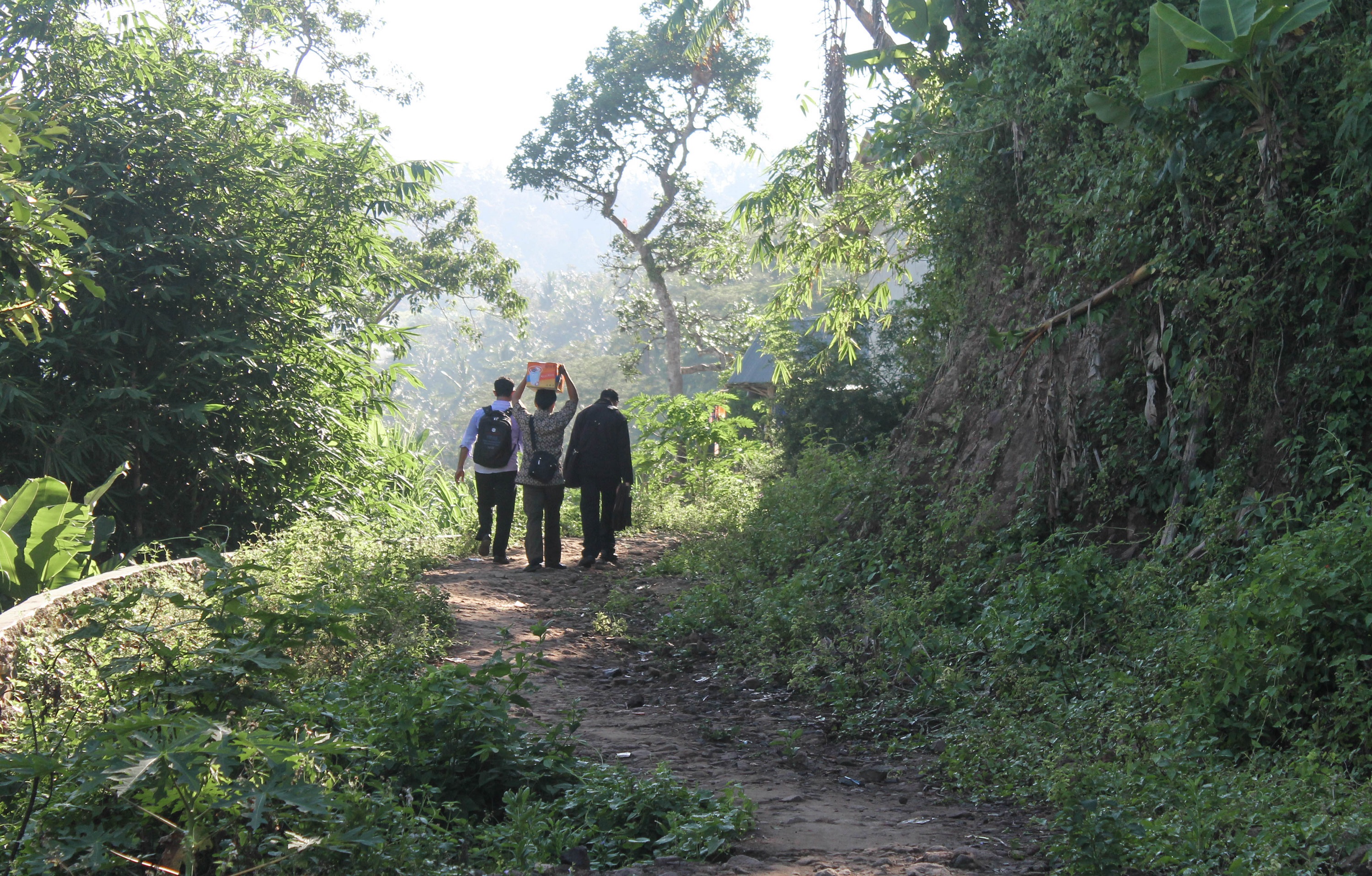 The path that students and teachers passed every day to school. It is the only available access to the school.

The school at the hillside, which consisted of two buildings, was relatively modest. There were five classrooms, one teacher room, and one toilet. The first building was for Grades 1–3, while students in grades 4–6 studied in the second building, which was located behind the first building.

Although the first building was meant for three classes, only two were available. To get around this situation, the teachers arranged the corridor in the first building to be the place of learning for Grade 1 students. The lack of classroom and the condition of the school that was far from ideal also caused the unavailability of facilities, such as School Health (UKS), library, and schoolyard that are commonly found in schools. 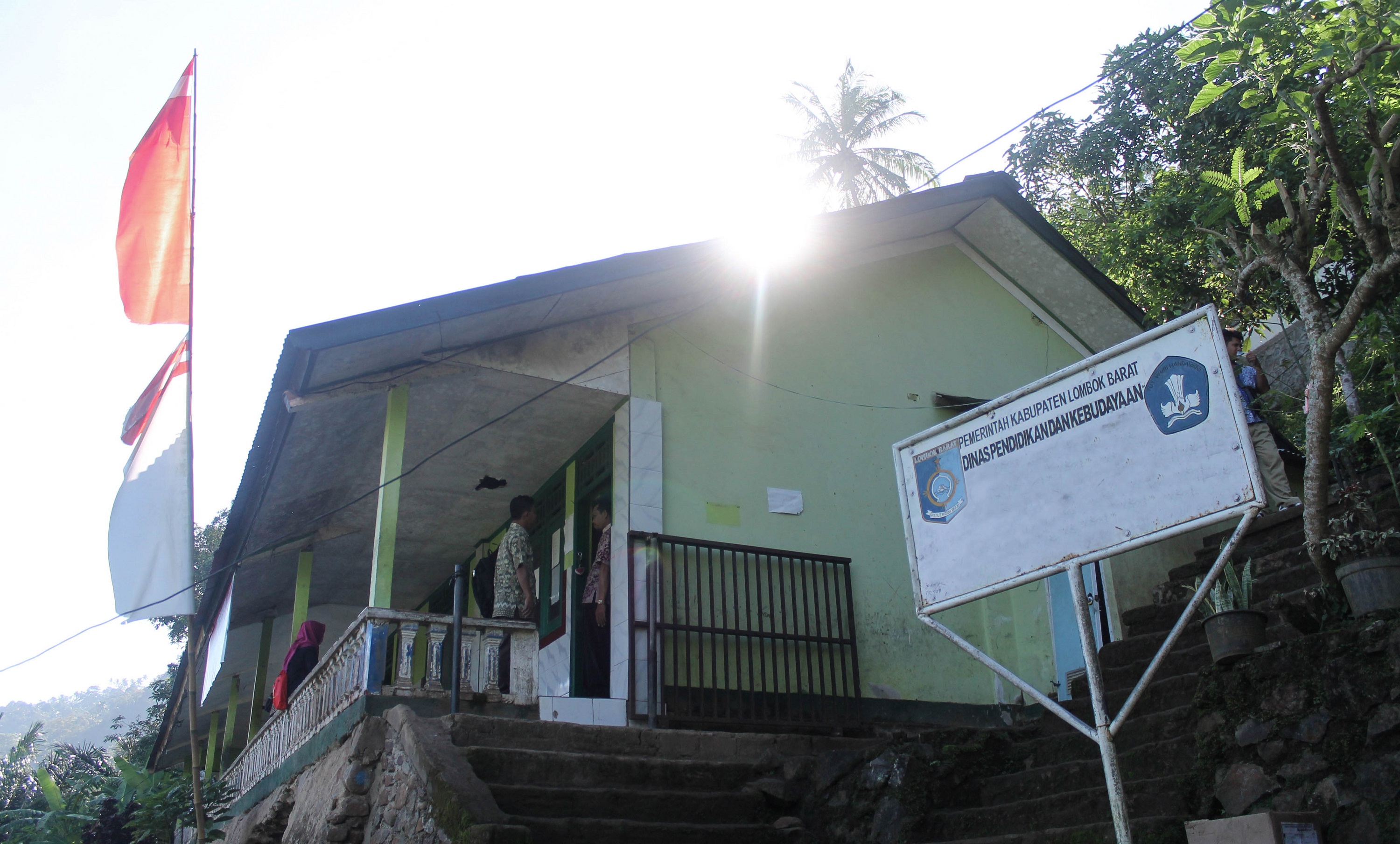 A modest school building where students of Grades 1–3 studied. 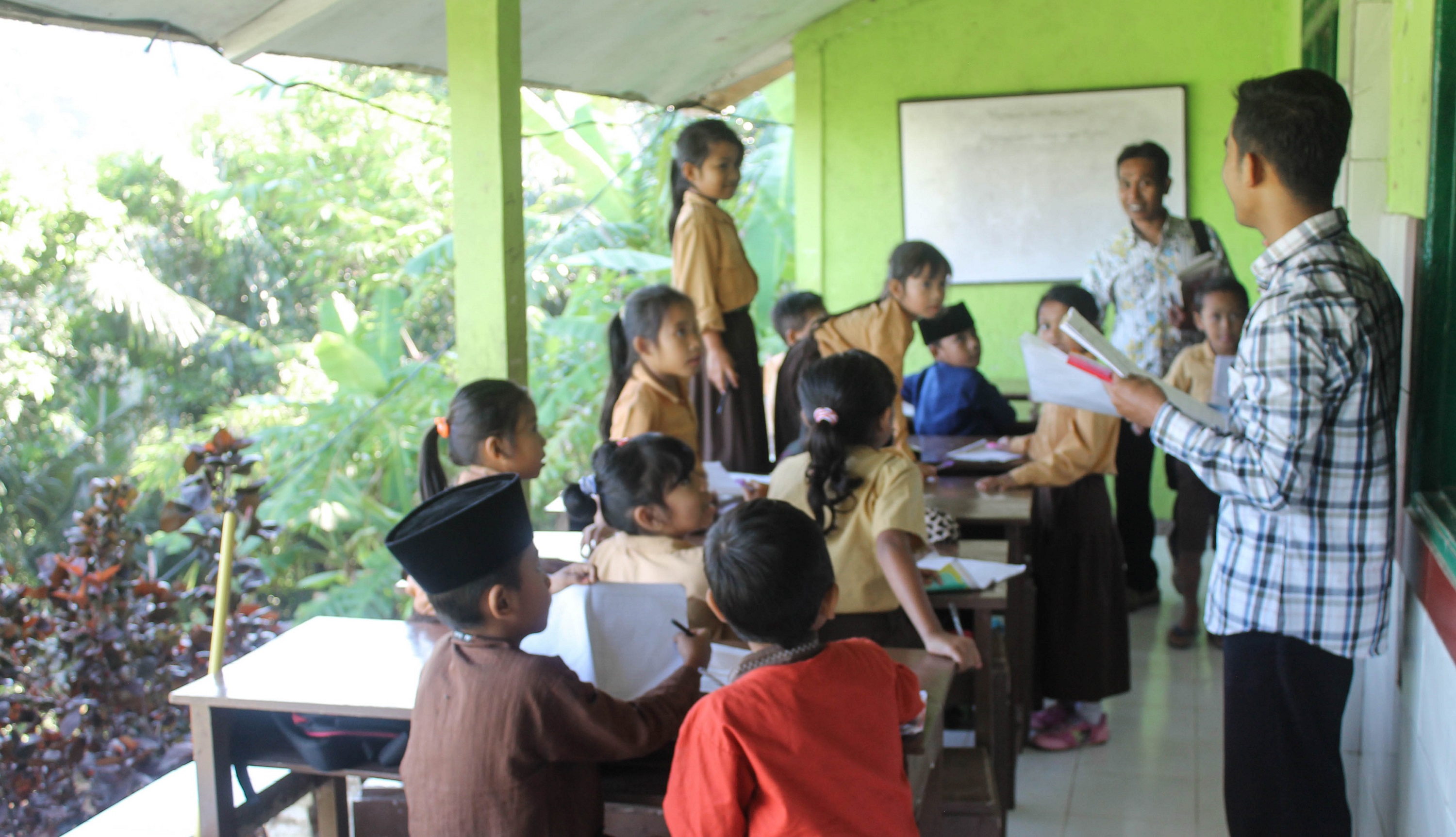 Due to the lack of classrooms, every day, Grade 1 students had to study in the school corridor.

Despite the unfavourable situation, the students were still eager to study. They are the epitome of the struggle that many Indonesian children, who have difficult access to school due to its remote location, have to face every day. Such great enthusiasm for learning needs to be nurtured and supported, especially by the teachers.

At this school, the teachers did just that by applying a local wisdom-based education. They saw that adjusting learning to the students’ character and background was essential to do.

One example was about school hours. Every morning, there were always students arriving late to school. Instead of reprimanding or punishing them, the teachers would understand because the location of the students' homes was indeed far from the school. 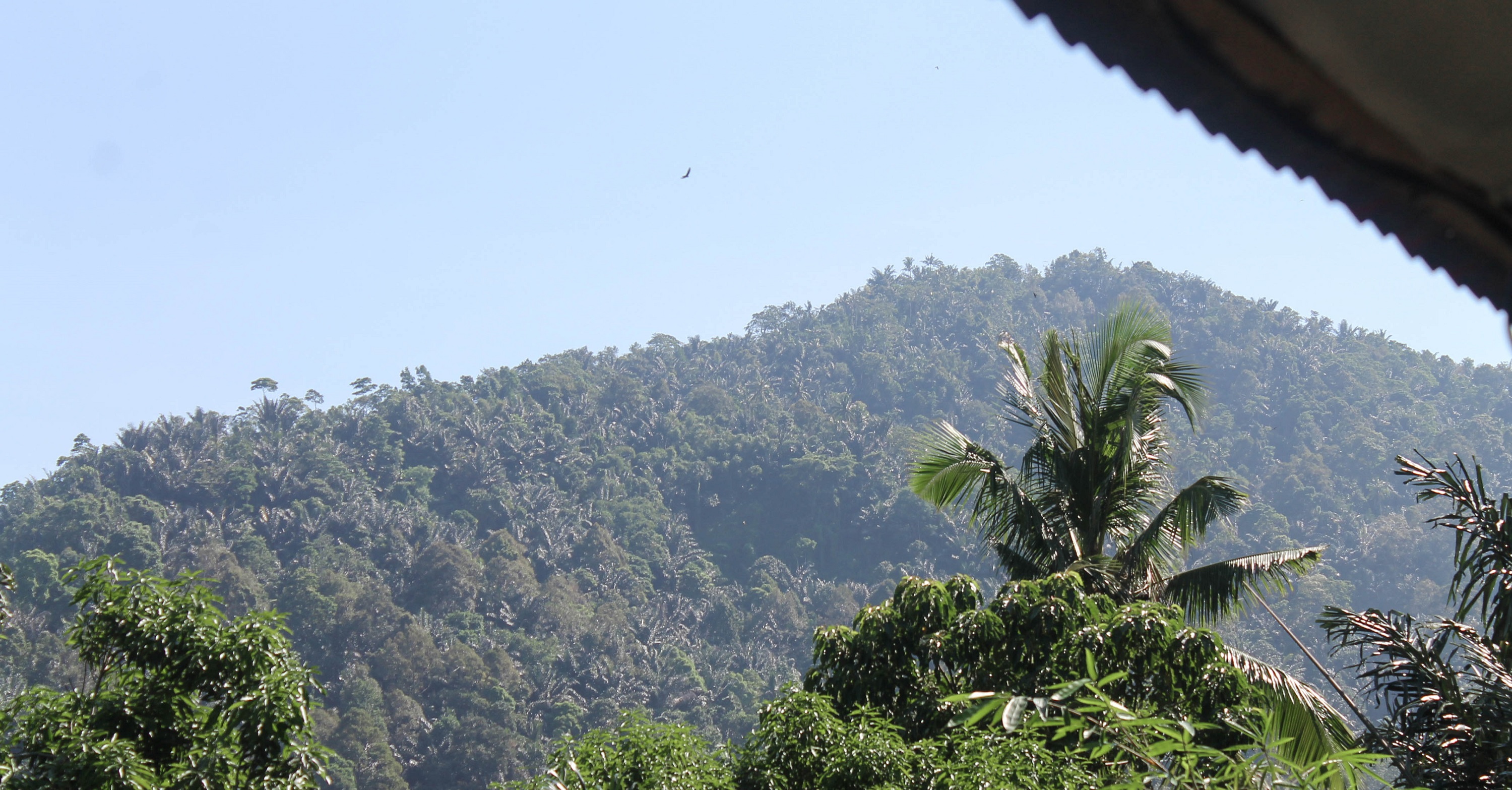 The view of the other hill from the school corridor. Every day, students living on the other side of that hill had to walk the path for miles to go to school. One student even lived on the hilltop.

Another example was about the school uniform. Teachers would also understand if there were students who did not wear their uniforms properly or even wore other than their uniforms. They thought it was more important to ensure students to keep going to school until they graduate rather than questioning their uniforms.

The local wisdom approach also applies in the teaching and learning activity. Communication between teachers and students in this school used two languages, Sasak and Indonesian because most of the students speak Sasak as their daily language. Students of small classes, Grades 1 and 2, generally could not speak Indonesian. Nevertheless, occasionally teachers would still speak Indonesian to encourage students to understand better and get used to practising communication in their national language. “If we only speak in Sasak, when can the children understand Indonesian?” said one teacher.

The teachers found the flexibility to be important to encourage students to always be enthusiastic about learning in school–especially considering the students have faced quite many challenges. Some of the factors that often prevented students from completing basic education were the long distance between their homes and school; the obligation to help their parents work in the plantation; and child marriage. 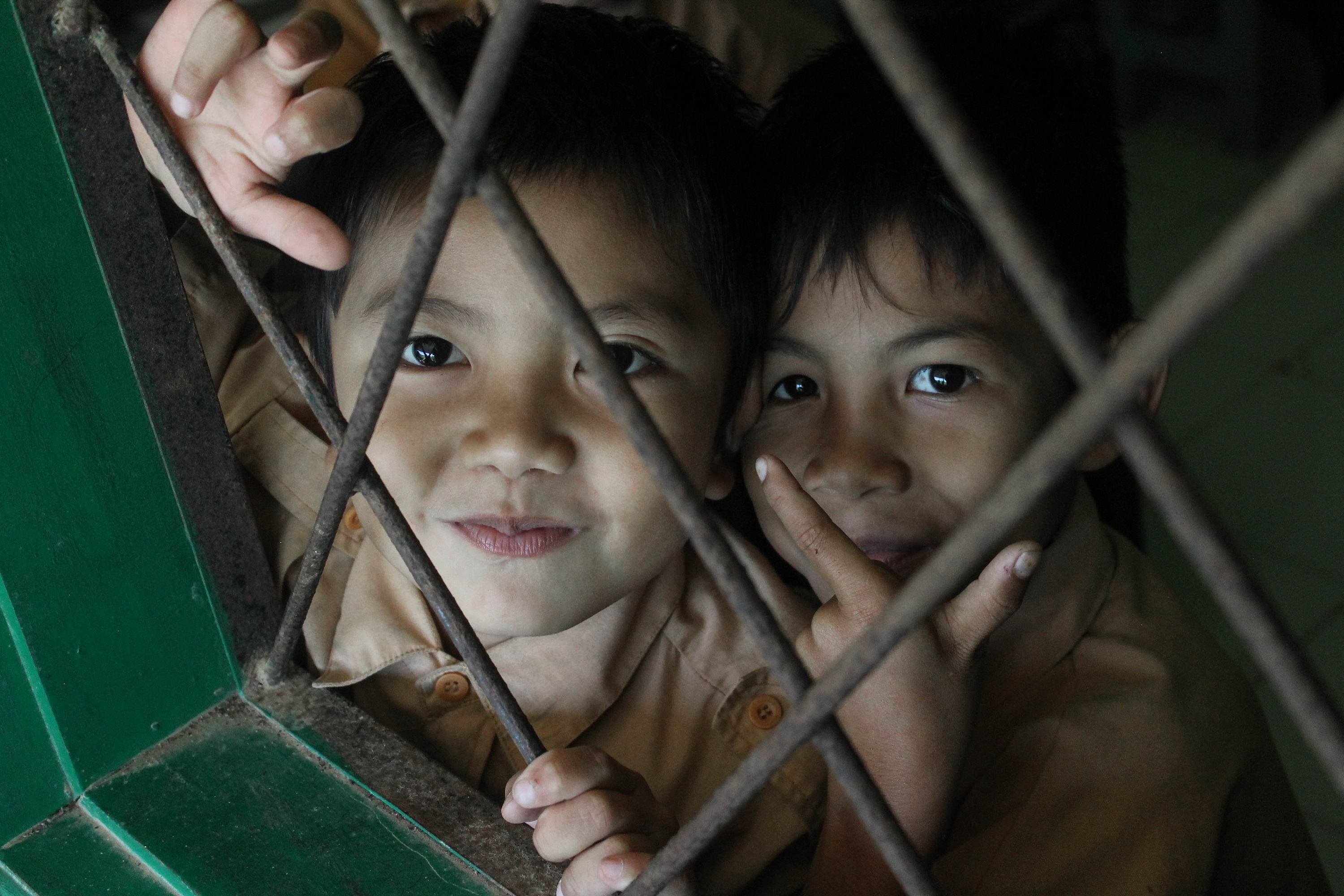 Two students who spoke Sasak every day, but also understood many simple words in Indonesian thanks to the local wisdom-based learning applied in their school.

The Vital Role of a Teacher

Even though there were only ten teachers in this school, they had a strong influence on the students’ attendance and learning enthusiasm. The teacher’s role had become increasingly important considering that one of the challenges that schools with difficult access often face was the low level of teacher attendance–which then caused the low student attendance rate. With teachers being present in the classroom, the school can indeed function as a place of learning and development for their students.

The teacher's role did not stop at school. In addition to teaching material in class, the teacher helped encourage their students to finish their school and continue to a higher level.

It was hardly ever easy. A teacher said that the attendance of students whose parents worked as farmers would usually decrease during the harvest season. “Some would not attend school for days. We would then went to their house, which was located on the other hill,” he said.

He paused, then continued, “Sometimes the biggest difficulty that we have to confront with is the child's surroundings, including their family. The awareness of the importance of completing education is still lacking. Here, children whose parents are farmers have a quite good economic condition. At the time of harvest, the parents will get a large income. Therefore, it is even more difficult to persuade them to support their children to pursue higher education.”

Nevertheless, teachers in this school had reasons that kept them going despite the many existing challenges. They believe their efforts would not be in vain. There had always been students who continued their education to junior high school, as well as subsequent levels.

Maybe that's why every day the teachers were still eager to travel long distances to school to meet their students. They realised that their attention and enthusiasm were the primary fuel for the successful implementation of education in the school at the hillside.