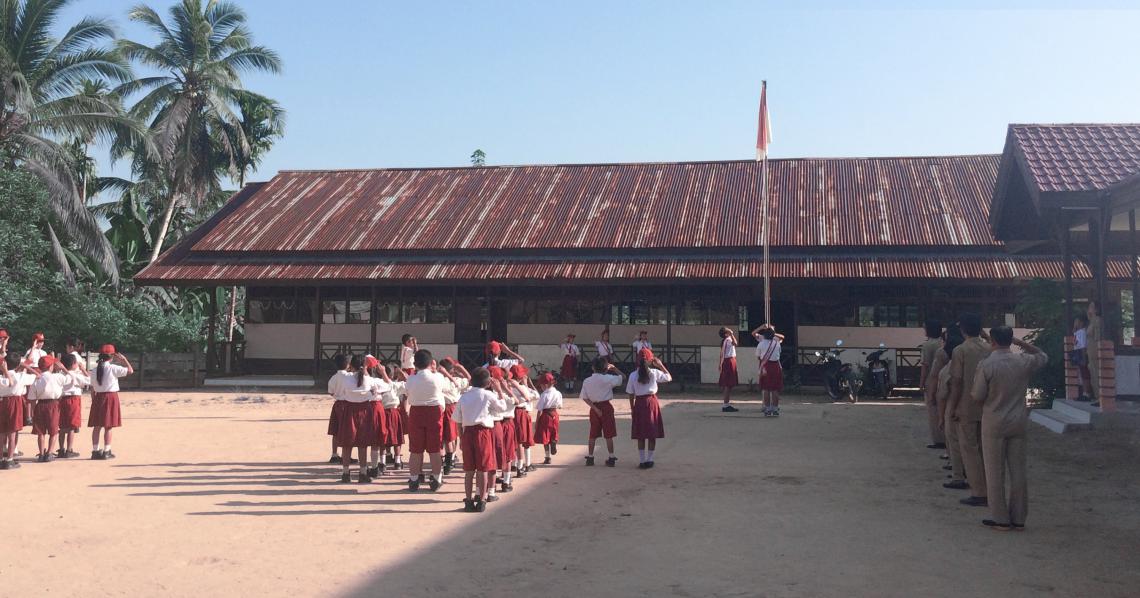 Indonesia has undertaken various large-scale education reforms over the past two decades, including increasing spending by threefold in real terms (Beatty et al., 2018). The country’s investments in education have achieved a gender-balanced, near-universal school enrolment, particularly at the elementary-school level. And yet significant challenges to improve learning outcomes still exist. The performance of Indonesian students in science, mathematics, and reading is one of the lowest among the participating countries of the 2015 Programme for International Student Assessment (PISA) (Organisation for Economic Co-operation and Development, 2016). The 2016 Indonesia National Assessment Programme (INAP) also shows that 77 percent of elementary school students do not master basic mathematics; about 73 percent of students do not master science; and almost 50 percent have low reading skills (Kementerian Pendidikan dan Kebudayaan, 2016).

Yet, perhaps surprisingly, when we asked education stakeholders from national to school levels about challenging issues in education, they seldom mentioned these worryingly low results on academic skills.1 Instead, these stakeholders emphasised other issues affecting students: moral degradation, reflected by violence (including bullying), drug use, free sex, and teenage pregnancy. National policymakers are particularly concerned about systemic cheating on national exams. In their view, the need for education to address these societal issues overshadows the urgency to address low learning outcomes. The media’s portrayal of societal ills may affect the perception of political figures, policymakers, and education stakeholders about the urgency of these problems (Damaledo, 2017; Permana, 2017).

For example, media have extensively covered bullying leading to death or physical and emotional injuries of students (Rahayu, 2017; Tanjung, 2017; Wasono, 2018). The 2015 Global School-based Student Health Survey (GSHS) noted that in Indonesia 20.6 percent of students aged 13-17 years old were bullied on one or more days during the 30 days before the survey; of those surveyed, 24.1 percent of males and 17.4 percent of females reported being bullied (World Health Organisation, 2015). In 2015, the Child Protection Commission (KPA) announced that while the cases of child abuse decreased, cases of children being bullied increased; bullying has started to occur in primary schools (Aulia, 2016).

Meanwhile, in the cases of free sex and unwanted pregnancies, Indonesia now has more adolescents who are sexually active outside of marriage (Utomo and McDonald, 2009 cited in Utomo and Utomo, 2013, p.3). In 2010, the Child Protection Commission (KPA) conducted a survey of 4,500 teenagers across 12 cities in Indonesia: 63 percent had engaged in sex and 21 percent of the females had had an abortion (Kusumaningsih, 2010 cited in Utomo and Utomo, 2013, p.3).

Recently, many stakeholders attribute the societal problems in Indonesia to the lack of moral, religiosity, and nationalism in the character of students despite the fact that public schools provide instruction on related subjects. Schools may be expected to play a key role in addressing these continuously expressed concerns about moral degradation and other general societal problems. This is not a recent development nor unique to Indonesia as socialisation of values is a key component of education in many societies (Paglayan, 2017). For example, in the 1990s, Utomo and McDonald (2009 cited in Utomo and Utomo, 2013, p.3) stated that extended schooling might significantly reduce rates of early marriage among Indonesian women.

How policymakers see the urgency of education as a key to tackle this societal problem is manifested in the enactment of the Regulation of the President of the Republic of Indonesia No. 87/2017 on Strengthening Character Education (PPK). Its underlying philosophy is based on at least 18 character values developed in the concept of character education. In PPK, these values are grouped into five aspects: religiosity, integrity, nationalism, independence, and mutual cooperation. Theoretically, these five aspects of character education present a tailored solution that is intended to overcome societal issues of concern without ignoring the problem of low learning outcomes. However, we observe that, in practice, the PPK tends to be restricted because of the predominance of three aspects: morality, religiosity, and nationalism. Very little direction is oriented towards improving academic learning.

Therefore, the push for Indonesian education to emphasise character education raises concerns, chief among them: how character is defined and the extent to which morality, religion, and nationalism are part of this; and whether the focus on character complements or detracts from a focus on improving student learning.

We discuss these issues in this article, drawing insights from our SABER-like2 exercise—one component of the RISE System Diagnostic Study—ongoing research activities of the RISE Programme in Indonesia, and a SMERU study.3

1We received similar responses from our informants of SMERU’s study on education in West Nusa Tenggara Province (2016) and RISE Programme in Indonesia’s studies—SABER-like exercise (2017), phone survey for listing potential study areas (2018), diagnostic study of Reform Area B (2018), and in-service teacher professional development (ongoing). The informants were, among others, officers of the education agency and other government agencies, school principals, teachers, parents, and community leaders.

2SABER-like refers to a diagnostic exercise of the current condition of an education system. It is an adaptation of the World Bank's Systems Approach for Better Education Results (SABER) diagnostic tool that covers the six RISE-relevant SABER domains (i.e., EMIS, Engaging the Private Sector, School Accountability and Autonomy, School Finance, Student Assessment, Teachers). The RISE Programme in Indonesia further extends the SABER-like exercise to ensure that other contextually applicable dimensions of Indonesia's education system are covered.

3A study on education in West Nusa Tenggara Province conducted in 2016.